Posted by SAMUEL J MACON at 9:45 AM No comments:

EXT. THE CHAPMAN FAMILY HOME - AFTERNOON
TITLE CARD READS: Madison Wisconsin 1968
A large, meticulously cared for colonial sits proudly on a deep green tract of suburban land. It is a perfect summer afternoon. Sitting in the garage is a shiny new black Cadillac.
INT. MASTER BATHROOM - CONTINUOUS
ROSALYN CHAPMAN, 42, stands looking at her reflection in the large bathroom mirror. She is wearing a conservative, elegant, navy blue dress suit. She carefully applies an even coat of lipstick, places the cap back on the lipstick, and sets it down on the marble counter top. Before leaving the bathroom she makes sure all items are in their proper place.
INT. STAIRCASE - CONTINUOUS
Rosalyn walks down the steps.
EXT. THE CHAPMAN FAMILY HOME - CONTINUOUS
Rosalyn walks out of the garage door and looks quietly up and down the block. All is quiet. She retreats a few steps, struggles to reach the pull cord for the garage door, and pulls the door closed.
INT. THE GARAGE - CONTINUOUS
Rosalyn is sitting, staring out the broad windshield of the black Cadillac. A tennis ball tied to a sting rests softly against the hood ornament. Without hesitation she turns the key, and the car rumbles to life. For a moment her hand rests on the shifter.
EXT. THE CHAPMAN FAMILY HOME - CONTINUOUS
A paper boy passes the house and launches the Tuesday evening edition on to the front steps.
NATHAN(V.O.)
The first time my Grandmother attempted to kill herself was in the garage of 432 Mendota Court in July of nineteen sixty-eight.
INT. THE LIVING ROOM - CONTINUOUS
We see a mantle crowded with Chapman family photos. Holidays, vacations, the good times.
INT. THE GARAGE - CONTINUOUS
Slowly the garage begins to cloud with exhaust. Rosalyn continues to stare out the front windshield. She then rolls down the window.
INT. STAIRCASE - CONTINUOUS
We see a portrait of HENRY CHAPMAN, 47 the patriarch of the family. He is dressed in a conductor’s tuxedo.
NATHAN (V.O.)
She was having a rather difficult time dealing with the fact that her husband, my grandfather, at this point in history, and at the time indefinitely, was living with his mistress. She was a young violinist in the University Symphony Orchestra of which he was lead conductor.
To the left of Henry’s portrait is one of THOMAS CHAPMAN as a teenager. He is dressed in his school uniform.
NATHAN (V.O.) (CONT’D)
Chances are she would of succeeded had my father, Thomas Chapman, not of been sent home early from his city landscaping job on the account of the tear gas and riot police.
EXT. THE WISCONSIN STATE CAPITOL - EARLIER THAT DAY
We see archival footage of protesters clashing with police. Banners scream, “PEACE NOW!” “END THE WAR.”
NATHAN (V.O.) (CONT’D)
His boss was of the mind that the grass would be there for the cutting tomorrow, hopefully free of tear gas, “those goddamn hippy dippys” as he would say, and riot police.
EXT. THE CHAPMAN FAMILY HOME - LATER ON
A young THOMAS CHAPMAN rolls up on his Schwinn cruiser and tosses it haphazardly on the front lawn. He then proceeds to the front door and enters.
INT. FRONT HALL - CONTINUOUS
Thomas enters the house, and walks from the front hall through the den on his way to the refrigerator.
THOMAS
Mom. Mom I’m home.
INT. DEN - CONTINUOUS
THOMAS
Mom! They sent me home.
INT. KITCHEN - CONTINUOUS
Unconcerned, Thomas flings open the fridge, and pulls out a glass jug of milk. He pauses a brief moment to make sure he is alone, and then proceeds to chug straight from the bottle. Just as his stomach is about to burst he lowers the bottle, breathing deeply. The deep breathing subsides as something grabs his attention.
INT. BACK HALLWAY - CONTINUOUS
Thomas curiously makes his way towards the garage door. The sound of the car running is now audible as is the stench of the exhaust.
THOMAS
Mom?
INT. GARAGE - CONTINUOUS
Thomas opens the door reluctantly. Through the carbon cloud we see fear come over him. He drops the milk shattering the bottle.
THOMAS
MOM! HOLY SHIT!
Rosalyn has passed out. Thomas opens the driver side door to pull her out, but soon launches into a panicked coughing fit. He then reconsiders his approach and hurls the garage door open.
EXT. DRIVEWAY - CONTINUOUS
A HUGE PLUME of exhaust smoke spills out staining the blue suburban sky. Thomas doubles over coughing , and then runs back into the garage.
INT. GARAGE - CONTINUOUS
Thomas continues to struggle with his mother’s lifeless body.
THOMAS
Mom! Mom wake up. Come on, we got to get you out of here.
In the struggle Thomas inadvertently knocks the gear shift into neutral, and the Cadillac begins rolling backwards. Unsure as to what’s exactly happening Thomas begins to keep pace with the car, all the while attempting to pull Rosalyn out of the vehicle.
EXT. DRIVEWAY - CONTINUOUS
The Cadillac comes rolling out of the garage with the driver side door open, and Thomas’ legs hanging out of it.
INT. CADILLAC - CONTINUOUS
Unsure as to how to deal with this very fucked situation, Thomas trips over his own feet and falls face first onto the driveway losing a shoe and getting a nosebleed in the process
EXT. DRIVEWAY - CONTINUOUS
Thomas raises his head just in time to see the Cadillac with get sideswiped by an unsuspecting VW beetle.
EXT. MENDOTA COURT - CONTINUOUS
Metal and glass fly everywhere as the houses on the block vomit spectators.
FADE OUT:
ROLL OPENING CREDITS
Posted by SAMUEL J MACON at 1:20 PM 1 comment: 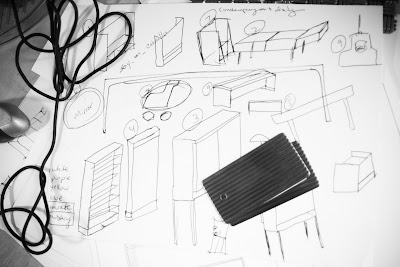 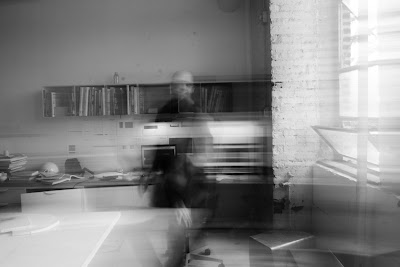 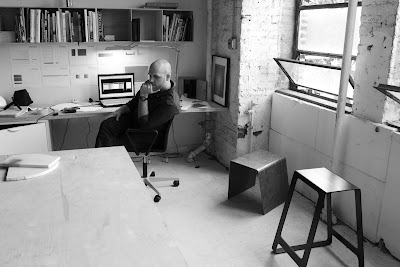 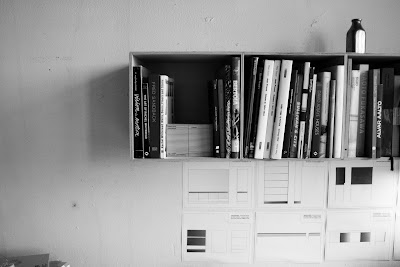 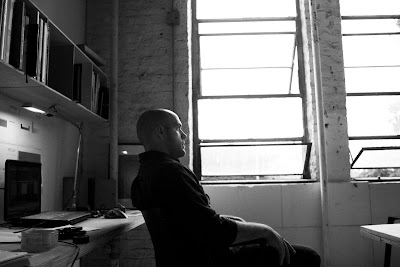 i recently photographed jonathan nesci at work in his studio for my good friend sam vinz's upcoming gallery project "volumes." more on that later. take a look at jonathan's work here.
Posted by SAMUEL J MACON at 2:17 PM No comments: