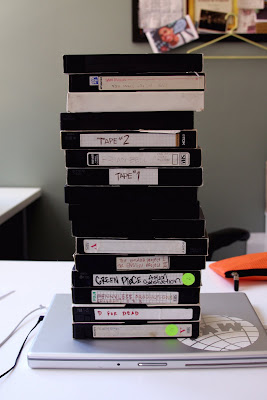 the other day, as i was attempting to make a closet more usable i came across a box that i never lost, but had no knowledge of it's whereabouts. it this box was roughly 300 polaroids all of which where taken in a house above a subway sandwich shop in milwaukee wisconsin circa 02, and several vhs tapes. these vhs tapes contain just about everything my friends and i ever shot between the years of 1993 through 2002-ish. such hits contained within are: green piece, crossroads, the english project 1, english project 2, the spanish american war, d for dead, episodes 1-3 of the never aired penneyless productions television show, brian bell, trick or treat, and many more.

photos being scanned. tapes being digitized. to type more to come, would be a gross understatement.

Labels: FILM, THE PAST